BWC did a great job installing a steel beam at my house! We ran into questionable engineering issues and Jeff stepped up to bring the trades together to bring a safe and solid solution. There was fluid communication the whole time and I felt that Jeff and his team were looking after my best interest.

Jeff saved the day. After a horrible experience with our original builder Jeff offered to help us. He lined up all the trades without delay and got us into our addition in less than 6 weeks. He kept us in the loop with all the processes, made sure supplies were ordered and delivered in a timely fashion. Offered us solutions in order to keep costs down and worked with engineer/city dealing with drawing/permit issues/resolutions. Jeff was great to work and would highly recommend him.

My husband and myself hired bloor west construction to excavate, install = new foundation and frame a new side addition to our home.

The project went great, stayed on budget and in time line.

My wife and I where stress with the project, but with the help from Jeff = and his crew everything went so good, we are glad we hire them.

Jeff, the owner of the company, is a straight shooter and is very passionate about what he does. And this is reflected in the professionalism and craftsmanship of every member of his team.

Even though our project was complicated with a many moving parts, Jeff and his crews dealt with all unforeseen challenges and solved all problems proactively and effectively. They completed work on time, within budget and kept us on track.

They surpassed our expectations and were great to deal with. They over-deliver!

Bloor West Construction where a great crew to work with. Their budget & timing worked perfectly for my project & the crew doing the work were top notch. I would not hesitate to use BWC again on future projects.

The framing crew was polite experienced and professional. The project went well with out incident. Very good experience. We will be working together on future projects.

I hired Bloor West Construction to do some structural framing in a new bungalow I bought. Jeff came out to see the work provided me with a quote right on the spot and had the work completed the very next day. The crew were professional and the service was fantastic. I would not hesitate to use Bloor West again in the future.

Design and Construction of Rooftop Deck

My deck looks amazing! They took the time to listen to and rectify any concerns as I raised with them. I’m now enjoying many beautiful summer evenings up there.

Jeff (owner of Bloor West Construction Inc) and his crew built us a front portico which added the curb appeal that our house was lacking (see before and after photo). We did provide him a drawing and reference photos of what we wanted which is highly recommended in order to avoid any misunderstandings. He did say that this was a small job for him so we appreciated that fact that he was willing to take on our project. What impressed us the most was how he stayed on budget and went above and beyond in order to make us happy. We are also very satisfied knowing that the job was done right, and that it’ll last for that many years to come. We’ll be sure to contact him in the future and would highly recommend anyone looking to hire Bloor West Construction Inc. Thank you Jeff for everything! 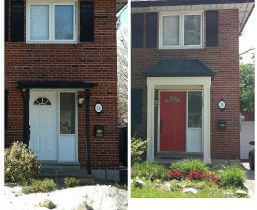 The work done by Bloor West Construction appears to be of terrific quality. Their skill, dedication to completing the projects expeditiously and their friendly manner was appreciated. For projects such as those completed I have no hesitation in recommending Jeff and his team.

I hired Jeff to sister seven 2x8 joists and five 2x4 studs that were damaged/heavily notched. I Also had him replace the existing subfloor in my bathroom with new 3/4″ plywood. Jeff is knowledgeable, honest and fair – everything you need in a contractor. His guys showed up on time and he was there at the end of the day when they were wrapping up to make sure all the work was done to my satisfaction. He also kept me informed of their progress throughout the day. He stayed on budget and on time with excellent quality of work! A pleasure to deal with and I will definitely call him again. These guys are professionals, which gives you peace of mind knowing the job will get done right and on time!

I recently had the pleasure of working with Jeff and Bloor West Construction while upgrading the kitchen and bathroom in my condo. I have worked with various contractors in the past for both personal and business projects and never been overly impressed with their ethics or workmanship but, I can honestly say, these guys are top notch PROS! They were very knowledgeable with building codes, materials, design and costing measures and they’re attention to detail was impeccable (I can be very picky!). They were tidy, courteous, prompt and stayed true to both their quote and time-lines. I just Love my new spaces and owe that to Bloor West Construction for making my vision a reality! I highly recommend them and Jeff for restoring my faith in honest, reliable, quality, and skilled craftsmanship. A rare find.

Bloor West Construction framed an addition for me. The job was done quickly and professionally.

Excavation/Foundation/Framing 2 Storey Addition to Our House

Bloor West Construction Inc. was always available on the phone and was great to communicate with.They were always on time and always did what they said.Also they stayed on the budget.Job was done earlier than projected and it was a pleasure working with them. Highly recommended!

We came across Bloor West Construction through an Internet search and gave them a call to come and quote on our kitchen renovation in August 2014. Jeff was very responsive, came over within a day and spent time discussing with us the best way to go about doing the job. He is upfront, honest, thorough, and hardworking. He is passionate about his business and this really shows in how he treats his clients. His crew are also very hardworking and produced great results. We got several quotes on the job, but we had a good instinct about Jeff, and his price was also very competitive. Would not hesitate to recommend him.

Very prompt response upon calling Jeff. He arrived within an hour to scope the work and had crews working within 3 hours. I was impressed by his prompt response when ever i had questions. Highly recommended for any jobs big or small.

Bloor West responded quickly, communicated clearly and got the job done on time… very happy with the work.

I had a small job of closing a wall and extending my closet wall as well as scraping smooth my ceiling,
The work was of good quality and completed in a timely manner. Jeff was very good with cummunicating
With me and always available to return my calls. Over all a job well done.

We started the renovation on our home over a year ago with another contractor. We had a horrible 12 months during the rough work that should have taken half the time. When it finally came time to do the finish work, we were very wary of the construction process, but you were exactly what we needed to get through the job. Repairs for mistakes were made with understanding to our situation, and the remaining major work was done in a reliable and collaborative manner. We were always able to communicate with you in an expedient fashion (which seems to be uncommon with many contractors), and the quality of the work was always supervised and checked by you. You are hands-on (once again, a valuable quality in a contractor) and knowledgeable, which made the finish process much easier on us. Thank you for your efforts!

I hired Jeff and his crew to replace the shingles on my garage which were old and leaking.
The Job was completed in one day in a timely fashion, the pricing was very competitive and within budget, others had quoted three times as much. A venting system was installed which allows greater breathing in the summer. Clean up was taken care on the same day also, I would hire Bloor west construction again

As project managers, we have been working with Jeff Lanthier of Bloor West Construction for a year and a half.  Bloor West has been involved in much of the construction work on a high-end, modern architectural renovation in the Forest Hill area that we were managing.  Jeff provided his skilled workers to do interior framing and insulating, complicated landing modifications, and the installation of an architectural steel and wood staircase.  His crew also built beautiful Brazilian hardwood fencing and contributed to the hard landscape construction.  During the time we’ve worked with Jeff, he never let us down, and if he said that his people would be on site, they were there when promised.  If there was an emergency requirement, Jeff always came through.  We would highly recommend Jeff and Bloor West Construction, and will continue to use him on future projects.

Bloor West Construction Inc. performed two jobs for me on rental properties that I own in downtown Toronto.  In one situation, some trees had fallen down and there was a need to provide an aesthetic backyard for the ground floor tenants.  Jeff was very responsive:  he built a deck and tidied up the yard and the job was completed within a few days to the satisfaction of the tenant and myself.  In the second situation, the tiles in the bathroom in the basement were breaking.  The tiled walls had to be demolished to determine the source of the problem.  Fortunately there was no issue with the weeping tiles and it appeared to be old grout work that had allowed water to seep between the tiles and ruin the drywall.  Jeff Lanthier and his crew replaced the dry wall with the proper material and retiled the bathroom.  Again the work was done quickly so the tenant was only without the use of the bathroom for a couple of days.  In short, I found Jeff responsive, able to provide quick competitive estimates and complete the job as promised on schedule.  I would recommend Jeff for future jobs.

Text Now
Click here to chat with us as soon as we are available!